Why Do Dogs Have Wet Noses? – My Blog

You probably know the feeling of a dog’s cold, wet nose pressing against your skin. And if you’re a pup parent, you have no doubt cleaned countless nose prints from every glass surface in your house. But have you ever wondered why your dog’s nose is wet? 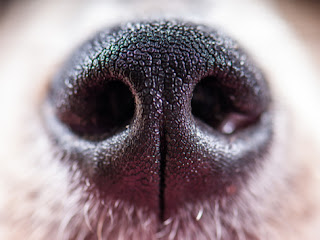 The wetness of a dog’s nose comes from a mixture of saliva and mucus, says Dr. Anita Guo, a veterinarian at the Beaumont Sainsbury Animal Hospital in London. A dog’s nose secretes its own, thin layer of mucus, and dogs add even more mucus and saliva by licking their noses frequently.

The details may be a little icky, but having a wet nose serves a few vital functions for dogs. First, keeping their noses moist helps dogs regulate their body temperature, says Guo. Dogs don’t have sweat glands all over their bodies like we do, so they rely on sweat glands in their noses and the pads of their feet to help maintain a safe internal temperature.

“The moisture of the nose helps them evaporate heat and helps them cool down their body,” she says.

Dogs’ wet noses also contribute to their incredible sense of smell. When dogs inhale, tiny scent particles floating in the air get trapped in their nose mucus. This “helps them to break down and interpret odors,” Guo explains.

Licking their noses helps dogs “smell” even more deeply. When a dog licks his nose, his tongue picks up some of the scent particles trapped in his nose’s mucus. He then touches his tongue to an olfactory gland called the Jacobson’s organ on the roof of his mouth, says Guo, which gives him an even more nuanced reading of the chemical compounds that make up odors.

“Their sense of smell is obviously much, much better than humans’ and we think this is the reason why,” she says.

MY DOG’S NOSE IS DRY. WHAT DOES IT MEAN?

Many pet parents worry if their dog has a dry nose, but this isn’t automatically cause for alarm.

“It is normal for a dog to have a wet nose, but just because they have a dry nose doesn’t mean they’re sick,” says Dr. Kathryn Primm, the owner and chief veterinarian at Applebrook Animal Hospital in Ooltewah, Tennessee. In fact, she says it is simply an “old wives’ tale that if a dog has a dry nose, it’s abnormal.”

Dogs’ noses could be dry at times for a number of reasons, says Guo. Their noses may be less moist when they wake up from a long sleep, simply because they haven’t been licking them for several hours. Sleeping in a warm room with low humidity levels could also make a dog’s nose especially dry, she adds. Before you run to the vet, Guo recommends waiting to see if the dog’s nose becomes moist again as the day goes on.

“In my experience, most brachycephalics [dogs with short snouts like Bulldogs and Pugs] have slightly drier noses,” she says. “I think that’s just because they’re less able to lick their noses.”

Also, some older dogs may lose nose moisture as they age because they’re producing less mucus. This could “make their noses a bit drier than we would [see] with a puppy,” Guo says.

WHEN TO WORRY ABOUT A DOG’S DRY NOSE

While pet parents shouldn’t panic just because their dog has a dry nose, there are some other nose conditions that should prompt a trip to the vet.

“If there are any changes in the color of the nose, or if there’s any bleeding, cracking, scaling, if there are any lumps and bumps around the muzzle or face or nose, these things are much more concerning,” Guo says. “If the dog’s having a nosebleed, we definitely want to see the dog, especially if it happens quite often.”

Also, if your dog not only has a dry nose, but is also acting sick or otherwise behaving unusually, that could be a sign of a more serious problem, Primm says.

Bottom line, if you notice any changes in the nose’s appearance, or changes in your dog’s behavior accompanied by a dry nose, you should always err on the side of caution and get your dog checked out.

However, if your dog wakes up one day with a dry nose but otherwise seems normal and healthy, there’s no need to drop everything and run to the vet.

“Obviously, the usual, wet-nosed dog is good, but if they do have a dry nose, it’s not the end of the world,” Guo says. “I don’t want owners to worry if the nose is dry, unless there are other signs.”