Five Remedies for Upset Stomach in Dogs – My Blog

When you have an upset stomach, you probably reach for ginger ale, crackers or Pepto-Bismol to settle your tummy. But what should you do when your dog’s stomach is out of sorts? Learn more about the causes and symptoms of upset stomach and tips for how to make your pup feel better with natural remedies, below. 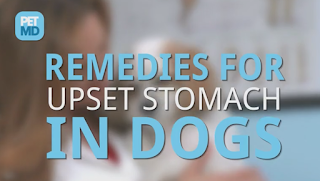 There are many reasons your dog may have an upset stomach, though there’s one common cause: he ate something he shouldn’t have, said Kathy Backus, DVM at Holistic Veterinary Services in Kaysville, Utah.

“Dogs are curious like kids; they’re always putting things in their mouth,” she said. “Vomiting and diarrhea are signs that a dog’s body is trying to expel something that shouldn’t be in their system. In a healthy dog, it’s a protective mechanism of the body that’s totally normal.”

Stress (like separation anxiety) may also trigger an upset stomach, as can bacteria imbalances in the gut and food sensitivities, which are most likely caused by your dog’s diet, she said.

Diarrhea and vomit are the most obvious signs that your dog’s stomach isn’t feeling right, but you should also keep an eye out for fatigue and loss lost of appetite, said Jody Bearman, DVM at Anshen Veterinary Acupuncture, Madison, Wisconsin.

Your dog may gulp a lot to combat reflux, lick his lips, or even lick the air or objects, too. If he’s nauseous, you may also see him eat grass in order to soothe his stomach or try to induce vomiting, Bearman said.

While it’s crucial to consult with your veterinarian before administering any home remedies to soothe your pup’s tummy problems, here are a few you can try:

When your dog’s stomach is trying to get rid of something, it can be helpful to stop putting more things in his stomach for 12 to 24 hours, Backus said. “If the GI system is having a tough time, you don’t want it to digest things.” Fasting for that long is absolutely fine for the dog, and it’ll likely be harder for the pet parent to withhold food than it will be for the dog not to eat, she said.

When your dog is vomiting or has diarrhea, you want to make sure he stays hydrated, however, giving him too much water may make his stomach even more upset, Backus said.

“Remove his water bowl from his reach, and give him ice chips every 2 to 3 hours,” she recommends. “See if he can keep that down, then give him some more ice cubes and a couple teaspoons of water.”

One of the most powerful things you can give to your dog to soothe and heal his stomach while keeping him hydrated is bone broth, Backus said. Simmer meat (on the bone) with apple cider vinegar and water in a crockpot (Backus prefers using a whole organic chicken). Once the meat falls off the bone, continue to simmer the bones until the minerals and marrow are released into the water, she said. Bone broth takes at least a day to make, so you’ll need to make this meal before your pet actually gets sick. If you make it ahead, however, you can skim off the fat and freeze it, then you can give your dog bone broth ice cubes when he’s sick, Backus said. In a pinch, you can also buy boxed bone broth.

When fighting indigestion, canned pumpkin is a favorite of many holistic veterinarians. “It has a low glycemic index, so it slowly absorbs, which helps with upset stomach and digestion,” Bearman said. Make sure to get canned pumpkin, and not pumpkin pie mix, as you don’t want to feed your dog spices, she said. According to Bearman, smaller dogs (approximately five pounds) can be fed ½ teaspoon of canned pumpkin, while larger dogs (approximately 75 pounds) can be fed 1 tablespoon. Randy Aronson, VMD of P.A.W.S Veterinary Center in Tucson, Arizona, even adds a tiny bit of ginger to the canned pumpkin. Like ginger ale, it soothes the stomach.

Watch the overall pattern of the symptoms, which should slowly subside over 24 to 48 hours, Backus said. However, if your dog seems to be constantly uncomfortable or if the symptoms get worse—for instance, the frequency continues to increase every few hours, you see blood in their vomit or stool, or they collapse—call a veterinarian, as these symptoms could be indicative of pancreatitis, stomach bloating, a severe allergy, leaky gut syndrome, abnormal parasites, or another serious condition, Aronson said.

If you discover that your dog ate something he’s not supposed to—like a plant, food, toy or chemical—seek help immediately, Backus said. If your pet dog has ingested something potentially poisonous and your veterinarian is unavailable, she recommends talking to an expert at the Pet Poison Helpline. The service is available 24 hours a day and the employees can explain a poison’s level of toxicity, common symptoms and signs, and proper care. They can also teach you how to poison-proof your household.

WHEN TO WORRY ABOUT UPSET STOMACH

An upset stomach every once in a while is normal in every dog, but when a dog suffers often, it could signal that something is wrong in his gastrointestinal tract, Aronson said.

In that case, he recommends taking a look at your dog’s diet and staying away from foods that may create inflammation because of a food hypersensitivity, like chicken, lamb and venison. Instead, choose meats like beef, buffalo, and fish that shouldn’t irritate your dog’s GI tract, he said. He also recommends steering clear of corn, soy, wheat, and rice, and opting for millet, which is a low glycemic index carb, meaning it takes longer to digest.

To help your dog maintain a healthy gut, you can also consider giving him a pre and probiotic, Aronson said. “Like humans, 60 percent of a dog’s immune system is in his bowels […] when it’s not healthy, your dog isn’t healthy.”

Always talk to your veterinarian first to find out the best course of action.